With Thanksgiving only a few days away, it’s the season to consult Martha Stewart for job search advice.

In a book published in 2005 entitled ‘The Martha Rules’, Ms. Stewart defined ten essentials for achieving business success. Let’s focus on #8 – “The pie isn’t perfect? Cut it into wedges – When faced with a business challenge, evaluate or assess the situation, gather the good things in sight, abandon the bad, clear your mind and move on.”

How do you apply this to your job search? Maybe the thought of competing in this economy is just overwhelming. Or, you’ve been going through a series of first round interviews and none have materialized into a full time offer. You have a business challenge. Time to assess you progress. What have you learned from the process so far? Are you focused on the rejections or the possibilities?

The job search is difficult. It requires a lot of hard work. You may be discouraged by rejection. Rather than focusing on the negative, use this holiday break as a point to leave the bad behind and as Martha says, clear your mind and move on.

To be successful in a job search today you need to honestly evaluate your strengths. What’s your area of expertise? Which employers can best use your skill set? Don’t waste time on job listings that don’t match your talents. If you find a perfect match, but the employer decides you’re not qualified, move on to the next one on your list.

Which brings me to Martha rule #6: ”Quality every day – Strive for quality in every decision, every day.” There are no short cuts. Approach each new opportunity with the energy of your first choice. 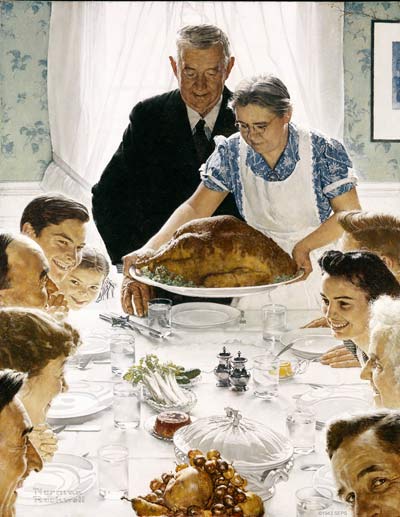 This year poetry has regained its’ place in our culture. One poem, meant to be read as a whole, can express our peculiar moment in time with a single line. “Any deliberate leap into chaos, small or large, with an intent to make order, matters.” Written in 1984, the Friday poem is ‘Thanksgiving’ by Linda McCarriston.

Every year we call it down upon ourselves,
the chaos of the day before the occasion,
the morning before the meal. Outdoors,
the men cut wood, fueling appetite
in the gray air, as Nana, Arlene, Mary,
Robin—whatever women we amount to—
turn loose from their wrappers the raw,
unmade ingredients. A flour sack leaks,
potatoes wobble down counter tops
tracking dirt like kids, blue hubbard erupts
into shards and sticky pulp when it’s whacked
with the big knife, cranberries leap away
rather than be halved. And the bird, poor
blue thing—only we see it in its dead skin—
gives up for good the long, obscene neck, the gizzard,
the liver quivering in my hand, the heart.

So what? What of it? Besides the laughter,
I mean, or the steam that shades the windows
so that the youngest sons must come inside
to see how the smells look. Besides
the piled wood closing over the porch windows,
the pipes the men fill, the beers
they crack, waiting in front of the game.

Any deliberate leap into chaos, small or large,
with an intent to make order, matters. That’s what.
A whole day has passed between the first apple
cored for pie, and the last glass polished
and set down. This is a feast we know how to make,
a Day of Feast, a day of thanksgiving
for all we have and all we are and whatever
we’ve learned to do with it: Dear God, we thank you
for your gifts in this kitchen, the fire,
the food, the wine. That we are together here.
Bless the world that swirls outside these windows—
a room full of gifts seeming raw and disordered,
a great room in which the stoves are cold,
the food scattered, the children locked forever
outside dark windows. Dear God, grant
to the makers and keepers power to save it all.

This week@work we remember the victims of terrorism on the bicycle path in Lower Manhattan and reflect on why the world comes to New York. On Sunday, the weekly ‘Corner Office’ column came to an end, a journalist shared her experience in the ‘gray area’ of sexual harassment and an American woman won the New York Marathon.

Memory
“I remember so well the first time I visited New York.” Contributing Op-Ed writer, Aatish Taseer shared his personal connection to the city as he honored Tuesday’s victims. “Most of the eight people killed in the terrorist attack in Lower Manhattan on Tuesday were foreigners visiting New York. One group, especially — five friends from Argentina celebrating the 30th anniversary of their high school graduation — had been planning their trip for years. They were part of a great unorganized commonwealth of people, out in the world, whose imagination New York has captured. It is heartbreaking to think that those for whom the dream of New York is most alluring should be the victims of so vivid a nightmare.”

Leadership
After 525 ‘Corner Office’ columns, journalist Adam Bryant ended his series with ‘How to Be The Big Boss’. 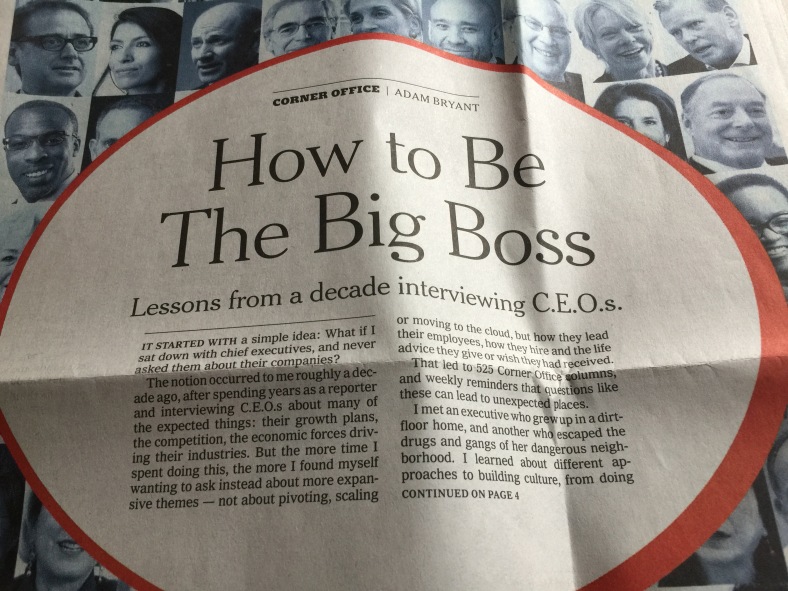 “It started with a simple idea: What if I sat down with chief executives, and never asked them about their companies?

The notion occurred to me roughly a decade ago, after spending years as a reporter and interviewing C.E.O.s about many of the expected things: their growth plans, the competition, the economic forces driving their industries. But the more time I spent doing this, the more I found myself wanting to ask instead about more expansive themes — not about pivoting, scaling or moving to the cloud, but how they lead their employees, how they hire, and the life advice they give or wish they had received.

My vote for career advice goes to something I heard from Joseph Plumeri, the vice chairman of First Data, a payments-processing company, and former chief executive of Willis Group Holdings. His biggest career inflection points, he told me, came from chance meetings, giving rise to his advice: “Play in traffic.”

“It means that if you go push yourself out there and you see people and do things and participate and get involved, something happens,” he said. “Both of my great occasions in life happened by accident simply because I showed up.”

Harassment
“What do you do when the big bank CEO calls your hotel room at 11 p.m.? Journalist and radio host Lizzie O’Leary reflected on a career of compromises and broadened the audience who might identify with #MeToo.

“Over the course of my career, I have shrugged off things that horrify me now. I learned to push through the routine humiliation. As an ambitious woman, I often ran an internal calculation about how much “trouble” I was willing to make. Should I fight about the story I want to do or the unwelcome remark about my legs? Time and time again, I went with the former. If I hadn’t, I don’t know if I would have been as successful. I’m not ashamed about wanting a career, but I can’t look back at some of my actions without wincing.

Now, in a senior position, I look at my brilliant younger colleagues, and I never want them to endure what for years I told myself was “gray stuff.” Ignoring it, as I’d learned to do, only lets it fester and continue.

I don’t know how to change centuries of conditioning. How to make men see women as peers. To let us just do our jobs. But maybe acknowledging that we live in a culture that doesn’t do that, is a start. I’m a radio host now. I believe strongly in the power of conversation. It is incumbent on everyone to talk about this.”

Career
What did you do on Sunday for two hours and 26 minutes? Shalane Flanagan ran through the streets of New York to become the first American woman in 40 years to win the New York Marathon.

Bonnie Ford reported on the athlete and the race.
“How my career ends is super important to me,” she told me in early April, still recovering from an iliac fracture that kept her out of her hometown Boston Marathon and unsure when she’d be able to resume high-volume training. “It doesn’t mean I’m going to win a major, but at least I’m going to try to win a major marathon in the U.S., and I need at least two more events.”

She said it again and again and again, right up until the ever of Sunday’s race. She’s also savvy enough to recognize that happy endings are especially hard to come by for marathoners, who generally have just two chances per calendar year in the window between their mid-20s and mid-30s, if they stay healthy.

Will New York be Flanagan’s walk-off run? The emotional lure of Boston is still out there, not to mention her instantly increased marketability. But her business, in a deeper sense, is finished. “This means a lot to me, to my family, and hopefully inspires the next generation of American women to just be patient,” Flanagan told reporters Sunday. Patient until the road starts to run out, and it’s time to make a move.”

Job Market
The final story of this week@work is from Daniel Bush, ‘6 takeaways from the October jobs report’.

“The U.S. economy added 261,000 jobs last month, and the unemployment rate dropped slightly to 4.1 percent, according to the Labor Department’s October jobs report.”