It has been a week. Another week. A week that began with NFL players joining Colin Kaepernick‘s protest@work. If you are confused by the fog of publicity over the past week, let Charles Blow clarify the issue for you.

“…patriotism is particularly fraught for black people in this country because the history of the country’s treatment of them is fraught. It’s not that black people aren’t patriotic; it’s just that patriotism can be a paradox.”

“We have to accept that different Americans see pride and principle differently, but that makes none of them less American.”

The Friday Poem this week, ‘What Kind of Times Are These’ was written in 1995 by poet and activist, Adrienne Rich. It was one poem in a collection described by her publisher:

“Her explorations go to the heart of democracy and love, and the historical and present endangerment of both.”

“This parable-like poem raises difficult questions about the nature and dangers of leadership and the complicity of ordinary citizens in their government’s uses (and abuses) of power.”

It just seemed the right choice for this week@work. “our country moving closer to its own truth and dread..”

What Kind of Times Are These

There’s a place between two stands of trees where the grass grows uphill
and the old revolutionary road breaks off into shadows
near a meeting-house abandoned by the persecuted
who disappeared into those shadows.

I’ve walked there picking mushrooms at the edge of dread, but don’t be fooled
this isn’t a Russian poem, this is not somewhere else but here
our country moving closer to its own truth and dread,
its own ways of making people disappear.

I won’t tell you where the place is, the dark mesh of the woods
meeting the unmarked strip of light—
ghost-ridden crossroads, leafmold paradise:
I know already who wants to buy it, sell it, make it disappear.

And I won’t tell you where it is, so why do I tell you
anything? Because you still listen, because in times like these
to have you listen at all, it’s necessary
to talk about trees.

Listen to the poet read ‘What Kind of Times Are These’

Does networking really take place in a galaxy far, far away? I think that’s the way some of us approach it – a great excuse for not engaging in the process. And then, there’s the whole ‘mentoring thing’ – Do I need one? How do I find one? Then what do I do?

It’s pretty simple. It’s hard work. Actually, once you start the work doesn’t end. You just need to recalculate the equation. It’s not a chore, it’s an amazing, fun exploration. And you can start today, with the folks in a college classroom, colleagues at work, members of your book club or athletic training group.

“There’s a Chinese saying: “Explore what’s best in the others and follow.” Among my friends, I always learn the best from them.”  Lee Shau Kee

Think about that. “Explore the best in others and follow.” Who are the ‘best’ in your world or the one you want to join? What are the qualities/values that align to win your vote as best@what they do? If you could have a few minutes with them, what would you ask?

The ‘networking’ thing is the exploration. Think about how you might go about planning for a hike, or travel. Why are you going? What do you hope to find? What research have you conducted to prepare? And, you’re planning to have fun, right?

Apply the same process to networking. “Explore the best in others…”

“…and follow.” Once you have started a conversation, it’s time to examine the next layer of career success. What has been the path to success? What were the failures, trade-offs, and recovery? How many detours came along the way? What do they look for in folks they hire?

Ask questions unique to your career aspirations. Your goal is to spark a longer conversation, one that may lead to a continuing professional relationship – a mentor.

“Among my friends, I always learn the best from them.”

Have you noticed how little time we have to catch our breath between ‘breaking news’ stories? We seem to be suffering from group attention span disorder. This week@work the focus is on narratives with a thread longer than 140 characters; important stories that dim when the next shiny object distracts: leadership, inequality and activism@work.

Forbes Magazine is celebrating 100 years in publication with essays by the 100 Greatest Living Business Minds. “To celebrate Forbes’ centennial, we amassed an A-to-Z encyclopedia of ideas from 100 entrepreneurs, visionaries and prophets of capitalism—the greatest ever collection of business essayists and greatest ever portrait portfolio in business history.”

Here’s a sample of thoughts shared by global leaders:
Georgio Armani: “I always try to maintain a sense of reality and ensure that I surround myself with the right people, who understand the times in which we live. In this line of work, my team is crucial. I’m the one who decides, but I like having lots of other people with whom I can discuss ideas, as this helps with the creative process. In the world of fashion, five years is already a hundred, so going forward, the challenge will be to capture the attention of a public that is increasingly stimulated by countless offers and new forms of communication.”

Lee Shau Kee: “There’s a Chinese saying: “Explore what’s best in the others and follow.” Among my friends, I always learn the best from them.”

Jacqueline Novogratz: “In our connected era, word spreads. People know when you are being true to your values. Don’t worry about reputation but about character. You build character by practicing empathy, practicing moral courage, practicing determination. Those traits are like muscles. When you are known for that, you don’t have to worry about guarding your reputation — others will do it for you.”

Patricia Cohen reports on the historical trend toward income inequality this week@work, ‘Why the Pain Persists Even as Incomes Rise’. “The disconnect between positive statistics and people’s day-to-day lives is one of the great economic and social puzzles of recent years.

“…the forces undermining the middle class may reach back farther than many economists have thought. The latest evidence comes from a group of researchers at universities and the Social Security Administration who have been tracking the earnings of hundreds of millions of individuals over their careers.”

In the late 1960s “instead of increasing, lifetime earnings for men made an about-face and began to decline. They have been dropping pretty much ever since. The result was that a 25-year-old man who entered the work force in 1967 and worked for the next three decades earned as much as $250,000 more, after taking inflation into account, than a man who had the same type of career but was 15 years younger…since the 1950s, three-quarters of working Americans have seen no change in lifetime income.”

Negotiating issues of gender and race form another aspect of inequality@work.

Jessi Hempel examined Ms. Pao’s career exploring ‘The Pao Effect is What Happens After Lean In’. “Pao’s story is, in part, her own attempt to discern just where reality diverged from her expectations. With clear-eyed hindsight, Pao reflects on her earliest career choices—where to apply to college and whether to go to law school, where to work and when to leave a job. She pauses to examine the things her college counselor told her, and the early sexism she encountered at Harvard Business School. “Honestly, I just thought there were a few men who were really immature, with lousy senses of humor, and I avoided them,” she writes of that time.”

Ellen Pao’s story is a cautionary tale for the intrepid women who ‘lean in’ to a career in tech.

Nellie Bowles’ ‘must read’ provides an up-to-the-minute update on the tech workplace. “a fringe element of men who say women are ruining the tech world…While many in the tech industry had previously dismissed the fringe men’s rights arguments, some investors, executives and engineers are now listening. Though studies and surveys show there is no denying the travails women face in the male-dominated industry, some said that the line for what counted as harassment had become too easy to cross and that the push for gender parity was too extreme a goal.”

The week@work ended with a demonstration of workplace activism reported by Nancy Armour, ‘In protests, NFL comes together for one of its most powerful days’. 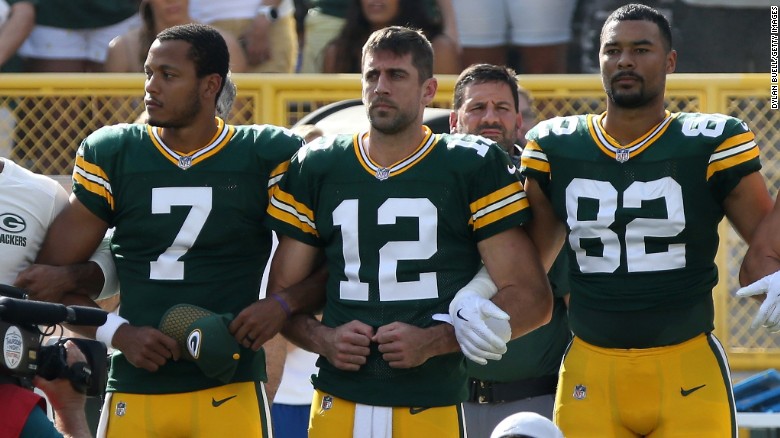 “The NFL had one of its finest moments before the games even began Sunday, coming together from every corner – players, coaches, owners and league office – in forceful rebuke of the latest torrent of hate from President Donald Trump. Whether black, white or brown, on bended knee or with locked arms, the NFL’s rare show of unity was both a dignified condemnation of the wrongs we still must right and a reminder that, for all of our differences, America remains our common ground.”

Where in the group of Fortune100 greatest business minds do we find the answer to the ongoing challenge of inequality@work?

John Paul Dejoria, founder of John Paul Mitchell Systems and co-founder of Patron Tequila shared his philosophy. “It’s a basic thing that goes back to the law to do unto others as you would have others do unto you. Treat and pay your staff exactly the way you’d want to be treated if you were in their place…In all the businesses we’re involved in it’s the exact same way. If you love your people and let them know you’re giving back, not just hoarding all the money for yourself, they want to join in.”