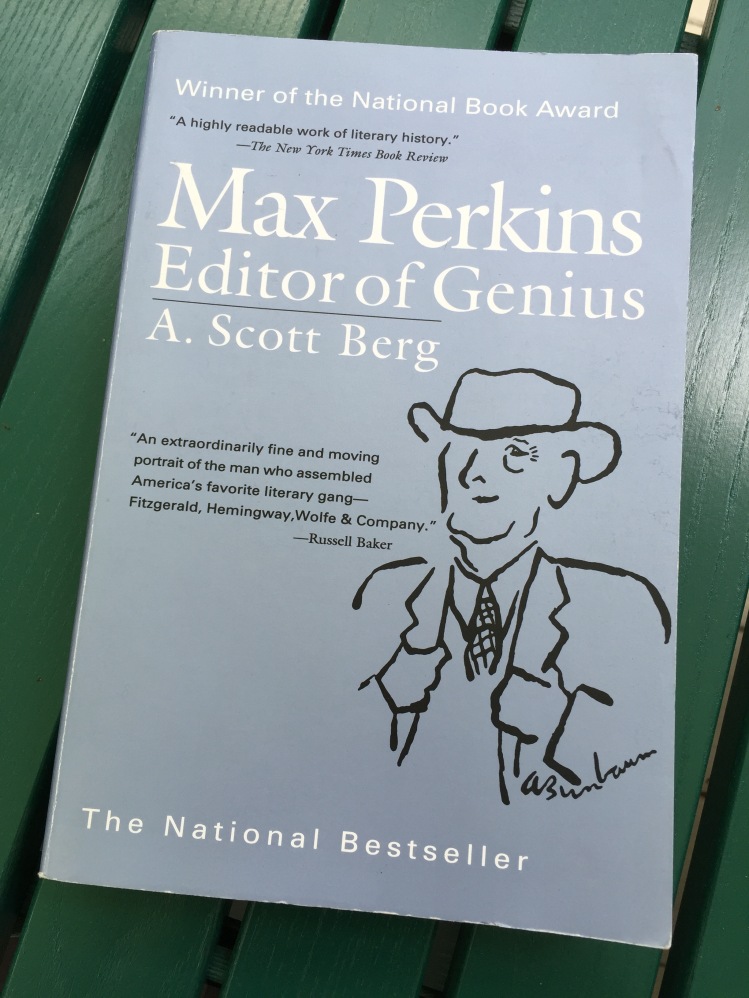 How many of you have turned your senior thesis into a career?

In 1971, recent Princeton graduate, A. Scott Berg began the seven-year process of expanding his college research into the biography of book editor Max Perkins. Earlier this month, a 38 year long journey, from the first film option of the 1978 National Book Award winning biography, ended with the opening of ‘Genius’ in theaters.

The Saturday Read this week is ‘Max Perkins:Editor of Genius’, a story that defines the role of a professional mentor as the narrative unfolds.

Allison Silver interviewed the author in 1981 for an article on the relationships between biographers and their subjects.

“Scott Berg’s biography ”Max Perkins: Editor of Genius” grew out of a fascination, bordering on fixation, for F. Scott Fitzgerald. At Princeton, Mr. Berg wrote his senior thesis on Perkins’s relations with Ernest Hemingway, Thomas Wolfe and Fitzgerald during the 1920’s. Mr. Berg realized there was a book in the life of the Scribner’s editor, and felt he was the one to write it. On graduation day, 1971, he told his roommate, ”I’ll take three months to research it, three months to write it and then another three months to get it published.” Mr. Berg remembers this philosophically. ”I was only six years off.”

Berg introduces Perkins at age sixty-one, in 1946, as he enters a storefront on Forty-third street in Manhattan, to speak to a group of students enrolled in an extension course on book publishing. “All were eager to find a foothold publishing and were attending the weekly seminars to increase their chances.”

“Maxwell Everts Perkins was unknown to the general public, but to people in the world of books he was a major figure, a kind of hero. For he was the consummate editor. As a young man he had discovered great new talents – such as F. Scott Fitzgerald, Ernest Hemingway, and Thomas Wolfe – and he had staked his career on them, defying the established tastes of the earlier generation and revolutionizing American literature. He had been associated with one firm, Charles Scribner’s Sons, for thirty-six years, and during that time, no editor at any house even approached his record for finding gifted authors and getting them into print.”

For many years this biography has been a ‘bible’ for aspiring editors. In this time of book publishing ‘disruption’, when editors have become an endangered species, it’s worth the readers’ time to travel to post WWI New York, when a different type of disruption was taking place as the novels of Fitzgerald, Hemingway and Wolfe began to appear on book shelves.

Let’s return to the 1946 extension class, as Berg continues his first chapter.

‘”The first thing you must remember,” he said, without quite facing his audience: “An editor does not add to a book. At best he serves as a handmaiden to an author. Don’t ever get to feeling important about yourself, because an editor at most releases energy. He creates nothing…A writers best work…comes entirely from himself…Because in the end an editor can get only as much out of an author as the author has in him.”‘

This advice, shared with folks pursuing a career in publishing, could be edited for any contemporary management text to define the modern day mentoring relationship.

“Beginning with Fitzgerald and continuing with each new writer he took on, he slowly altered the traditional notion of the editor’s role. He sought out authors who were not just “safe”, conventional in style and bland in content, but who spoke in a new voice about the values of the postwar world. In this way, as an editor he did more than reflect the standards of his age; he consciously influenced and changed them by the new talents he published…

The successful editor is one who is constantly finding new writers, nurturing their talents, and publishing them with critical and financial success. The thrill of developing fresh writing makes the search worthwhile, even when the waiting and working becomes months, sometimes years, of drudgery and frequent disappointment.”

The biography offers a chronological timeline of relationships with the icons of early twentieth century American literature: Fitzgerald, Hemingway, Wolfe and Ring Lardner. It also includes his nurturing of emerging women writers in the 1930s: Marcia Davenport, Marjorie Kinnan Rawlings, and Taylor Caldwell. In the final chapter, we meet two of the last authors Perkins edits in 1946 and 1947: James Jones, author of ‘From Here to Eternity’ and Alan Paton, author of ‘Cry, the Beloved Country’. Max Perkins died on June 17, 1947.

How do you turn you senior thesis into a career? In the 1981 interview with Allison Silver, Berg shared his secret.

“During his first months of research, the scope of his work broadened every day until, by the end of that summer, he says, ”I made a private pact with myself then that I would work on the book until I finished it.” Mr. Berg remembers deciding ”that I was not going to be a slave to arbitrary dates; because, in truth, I owed Max Perkins more than that. Suddenly I went into twilight-zone time.”

This attitude toward deadlines has remained with Mr. Berg. He recommends that anyone involved in a long project should ”move to Los Angeles, because the seasons don’t change and you’re not aware of the passage of time. To this day I cannot account for three months between May and September, 1974.”

If we read biographies will be be better leaders?

“It is not histories I am writing, but lives; the most glorious deeds do not always indicate virtue or vice, but a small thing like a phrase or a jest often reveals more of a character than the bloodiest battles.”  Plutarch, ‘Parallel Lives’

We read biographies to extract the wisdom of others. Biographies offer a portal into understanding the larger world where these lives were lived. Read closely they offer proof that history repeats itself.

“We live – at least in the Western world – in a golden age for biography. The depiction of real lives in every medium from print to film, from radio to television and the Internet is more popular than ever…Biography, today, remains as it has always been, the record and interpretation of real lives – the lives of others and ourselves.”  Nigel Hamilton, ‘How To Do Biography’

The ‘Saturday Read’ this week is not a recommendation of a single title, but a suggestion of a genre.

Despite a well publicized ‘biography kerfuffle’ over a new, ‘unauthorized’ biography of Steve Jobs written by Fast Company reporters, Brent Schlender and Rick Tetzeli, it has been the ‘year of biography’, offering a variety of choices, spanning centuries.

The 2015 Pulitzer Prize for Biography was awarded to ‘The Pope and Mussolini: The Secret History of Pius XI and the Rise of Fascism in Europe’ by David I. Kertzer. Also nominated as finalists in this category were: ‘Louis Armstrong: Master of Modernism’ by Thomas Brothers and ‘Stalin: Volume I: Paradoxes of Power, 1878-1928’ by Stephen Kotkin.

The LA Times Book Prizes includes a standalone category for biography. This year Andrew Roberts‘ ‘Napoleon: A Life’ received the award in a roster of respected nominees including Pulitzer finalist Steve Kotkin along with:

On the Saturday morning of the LA Times Festival of Books I attended a panel moderated by Eisenhower biographer, Jim Newton. Biographers Downey and Kotkin revealed their subjects were very unlikely historical figures. Looking back at their early years, Isabella of Spain and Stalin showed little promise for the lives they would eventually lead. Yet all of these writers crafted stories of actors who emerged onto the global stage amid success, controversy and failure.  A. Scott Berg who published a hefty bio of Woodrow Wilson last year closed the discussion describing the role of biography as “a way to illuminate the times”.

This weekend, select a book from those suggested here or find one about someone you admire and perhaps would like to emulate. Discover a mentor in the pages of biography.