On college campuses across the country it’s ‘conversion’ time; next level marketing to the chosen to turn them into the enrolled. How do you differentiate between alternatives? If you take the commodity approach, it’s all about guaranteed employment. Here’s the thing – there are no guarantees.

It’s reasonable to consider post-grad employment when you’re investing a significant amount of money in a college degree. But that’s what it is, an investment, not a purchase. For the student, ‘attending’ college is not a passive act, it’s a full-time commitment. The ROI is a direct result of the effort, not dollars expended.

“A college education, then, if it is a commodity, is no car. The courses the student decides to take (and not take), the amount of work the student does, the intellectual curiosity the student exhibits, her participation in class, his focus and determination — all contribute far more to her educational “outcome” than the college’s overall curriculum, much less its amenities and social life. Yet most public discussion of higher ed today pretends that students simply receive their education from colleges the way a person walks out of Best Buy with a television.”

When you ask the question ‘How many students are employed at graduation?’ you’re asking about the resale value of the car.

No one in today’s job market is guaranteed work. Any individual who believes their institutional pedigree will stand alone to open career doors is delusional.

The question to ask is ‘What are the resources available to assist students seeking work?’ The ‘support’ assets are the constant in a volatile job market. Access to this ‘capital’ is the true measure of a university’s commitment to post-grad employment. 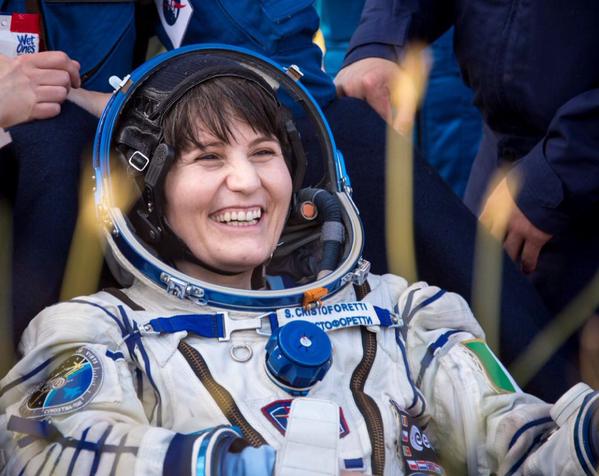 This week@work we welcomed astronaut, Sam Cristoforetti, back to the home planet, and female senior executives at Apple to the Worldwide Developers Conference stage. A former Ivy League president reminded us that college is not a commodity and we learned where we should be living to have the best opportunity for job satisfaction.

Sam Cristoforetti, aka AstroSamantha, returned to earth and the steppes of Kazakhstan on Thursday. Her fan base grew to  558.1K followers on Twitter during her 199 days in space. Now that she has returned, we will miss her end of day wishes: “Buona notte dallo spazio.” Welcome home, Captain Cristoforetti.

“Apple Music, new operating systems and a smarter Siri were front and center at Apple Inc.’s Worldwide Developers Conference, but it wasn’t a new product that got people talking — it was women.

During Monday’s keynote presentation, Jennifer Bailey, Apple’s vice president of Internet services, and Susan Prescott, vice president of product marketing, took the stage to announce new developments with Apple Pay and a news reading app. It was the first time that Apple has had female executives on stage at any of its major events since at least the launch of the first iPhone in 2007.”

In an interview with Mashable prior to the meeting, Apple CEO, Tim Cook shared responsibility for the lack of diversity in Silicon Valley:

“Cook doesn’t subscribe to the idea that women just don’t want to be involved in tech — calling that argument a “cop-out.”

“I think it’s our fault — ‘our’ meaning the whole tech community,” he says. “I think in general we haven’t done enough to reach out and show young women that it’s cool to do it and how much fun it can be.”

If you are interested in working for Apple, the good news is San Francisco is at the top of ‘Forbes Top Cities for Employee Satisfaction’.

“Topping the list is San Francisco, where a largely tech-focused workforce finds the deepest levels of satisfaction with their work. In fact, several California cities can claim deeply engaged workforces, as San Jose and San Diego round out the top three spots on this ranking.

Hunter Rawlings, former president of Cornell University and current president of the Association of American Universities disputed the view that college is a commodity.

“A college education, then, if it is a commodity, is no car. The courses the student decides to take (and not take), the amount of work the student does, the intellectual curiosity the student exhibits, her participation in class, his focus and determination — all contribute far more to her educational “outcome” than the college’s overall curriculum, much less its amenities and social life. Yet most public discussion of higher ed today pretends that students simply receive their education from colleges the way a person walks out of Best Buy with a television.

Students need to apply themselves to the daunting task of using their minds, a much harder challenge than most people realize, until they actually try to do it. To write a thoughtful, persuasive argument requires hard thinking and clear, cogent rhetoric. To research any moderately complex topic requires formulating good questions, critically examining lots of evidence, analyzing one’s data, and presenting one’s findings in succinct prose or scientific formulas.”

The Atlantic’s Michael Levitin reflected on ‘The Triumph of Occupy Wall Street’.

“Nearly four years after the precipitous rise of Occupy Wall Street, the movement so many thought had disappeared has instead splintered and regrown into a variety of focused causes. Income inequality is the crisis du jour—a problem that all 2016 presidential candidates must grapple with because they can no longer afford not to. And, in fact, it’s just one of a long list of legislative and political successes for which the Occupy movement can take credit.”

And finally, for all you sports fans, the US Women’s National Team began their quest for soccer’s world cup with a win over Australia and a draw with Sweden.  Caitlyn Kelley, writing in The New Yorker, ‘The Hope Solo Fiasco’, asked the question on the minds of many loyal followers, “Am I going to have to root for Hope Solo if I want to root for Team U.S.A.?”

“This summer it will be sixteen years since the U.S. women last won the World Cup, which was hosted in the United States. The success of the tournament—not just the fact that the American women took home the trophy but that they did it in front of packed stadiums and record millions of television viewers—was an affirmation of the value of Title IX. Thanks to that piece of legislation, we want and expect women to have the same opportunities as men in sports. We should hold women athletes—and their organizations—equally accountable for mistakes, too.”