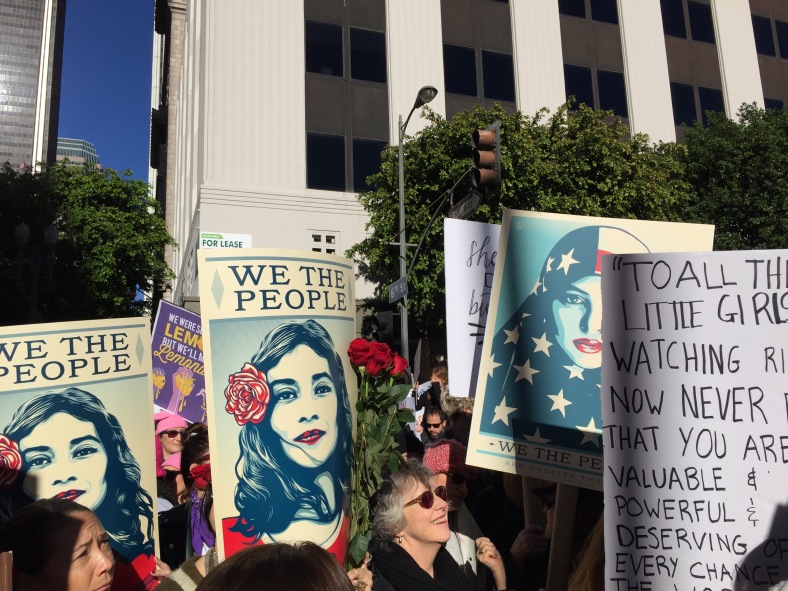 I got as far as Pershing Square in Downtown LA. There were too many people to ‘march’ to City Hall. The real estate in-between was occupied by a sea of veteran and newly-minted activists.

Eventually, we headed in the opposite direction along 6th and up Grand to the Disney Concert Hall. The thousands in the ‘tangent march’ I joined never heard the political speeches of the day, but were overjoyed in the surprise of the turnout.

We were a rainbow representation of the California we call home. We were messengers from divergent origin, chanting with one voice. “This is what democracy looks like”.

This is what I want you to understand. The result of the U.S. election may have been the catalyst, but this is about families, values and redefining a new American dream. It’s not about following a 70 year old white man into the past, but creating a solid bridge to a viable global future for our children and grandchildren. It’s about legacy, not name calling.

If we can harness the energy and creativity that knitted pink pussy hats, and illustrated catchy posters, we can change the world. The present day reality holds enough shock value without piling on with unproductive language that creates a diversion from authentic action.

We are the parents who are the everyday role models for our children. It’s our lot in life to “go high, when others go low”. We are the adults in the room.

Many doubt our unity. They minimize our resolve. They write we cannot sustain the momentum initiated on 1/21/17.

How often, as women@work, have we heard those whispered doubts of our ability to get the job done – to compete? Enough.

I have great respect for those who have blazed trails so others might succeed, but it’s time to hand over the power to the next generation of dreamers – to trust their ability to employ genuine entrepreneurial skill to reimagine the future.

They were there on Saturday; on every street, in every city around the world.

Where do we begin? Start local. Be a mentor, donate to organizations that support K-12 leadership initiatives. Invest in people.

Take any opportunity to start a conversation, and listen.

Read the constitution. Fill in the gaps in your knowledge of American history. Learn the words to ‘We Shall Overcome’.

Visit the library or local bookstore and read at least one book by an author from another culture.

Go to your state capitol, find your representative, and ask, what they are doing to encourage a new cohort of leaders? Offer to help.

If you have massive amounts of cash, avoid the temptation to create a private label on a building, and put your money toward those who will cement a more permanent legacy through public service.

If you can’t find an organization with a ‘mission match’ to your values, create one. It was one woman’s Facebook post that grew into the Women’s March.

And so it begins…