“Are we there yet?” could be the quote of the pandemic. The answer is no. The problem hasn’t been solved, although we continue to pretend it has. Just take a detour past your local food bank and you’ll experience an instant reality check on expectations. A visit to your local post office might offer a clue to what your workplace might look like if you ever return.

We stayed inside… for a time. And that eased the crisis in many ‘hot spots’ for hospitals and health care professionals. But then we got tired of ‘stay at home’. We saw folks venturing out and government leaders relaxing rules. But the problem hadn’t been solved. We’re still in the middle. Research into a vaccine is progressing, but testing still lags, and nothing has really changed from those early weeks in March. The virus is still out there seeking every opportunity to sink its ‘hooks’ into our various critical organs. What has changed is our belief that “we can handle it” – the reward far outweighs the risk – FOMO on career and life.

We’re not an ‘in limbo’ culture of humans. Uncertainty is not our strong suit. We avoid commitments that might exceed 200 pages or two weeks. We’re more at home at the movies where all is resolved in 90 – 120 minutes.

But, COVID. Our momentum slowed. It took a bit of time to adjust – to the quiet, the change in energy, the middle.

Here we are in a place with time to observe and reflect – an unscheduled leave of absence from our previous life – in the home of innovation and creativity. Yes, the middle is where imagination carves out our path to ‘THE END’.

A simple ‘construct as creative catalyst’ was provided by former Irish president and High Commissioner for Human Rights, Mary Robinson at the Edinburgh Book Festival in 2019. Speaking on the topic of climate change (insert your idea) she suggested three steps:

‘Make climate change (or your idea) personal in your life.

Get angry and get active.

Imagine this world we want to hurry towards.”

Imagine the world we want to hurry towards – that’s what we do when we’re in the middle.

That’s why we’re here at the nexus of past and future – not to consider a ‘new normal’, but to invent the unimaginable. And that takes time – the time we have now, in the middle. 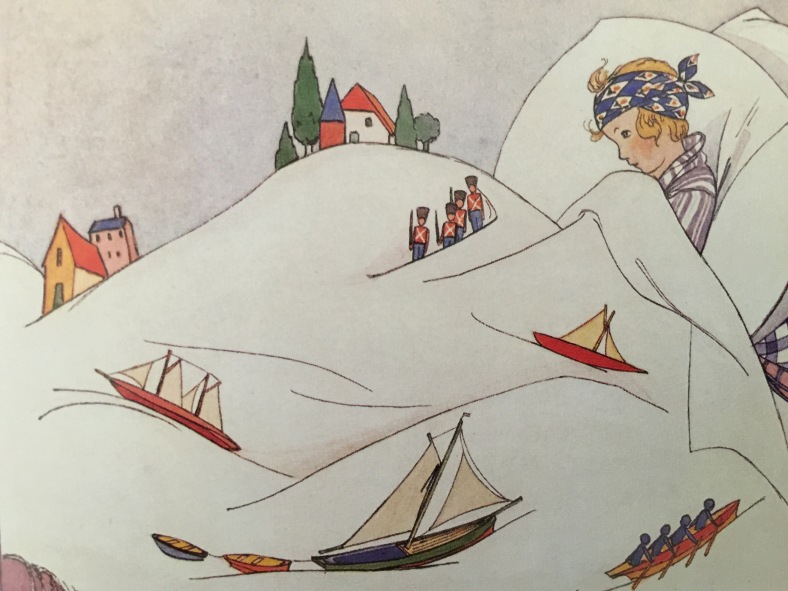 There has been quite a bit of ‘health@work’ news this week as one of the major candidates for U.S. President took a couple of sick days away from her campaign.

In the spirit of taking a respite to heal, enter the imagination of writer and poet Robert Louis Stevenson.

The Land of Counterpane

When I was sick and lay a-bed,
I had two pillows at my head,
And all my toys beside me lay
To keep me happy all the day.

And sometimes for an hour or so
I watched my leaden soldiers go,
With different uniforms and drills,
Among the bed-clothes, through the hills;

And sometimes sent my ships in fleets
All up and down among the sheets;
Or brought my trees and houses out,
And planted cities all about.

I was the giant great and still
That sits upon the pillow-hill,
And sees before him, dale and plain,
The pleasant land of counterpane.

Robert Louis Stevenson  from ‘A Child’s Garden of Verses’ 1913 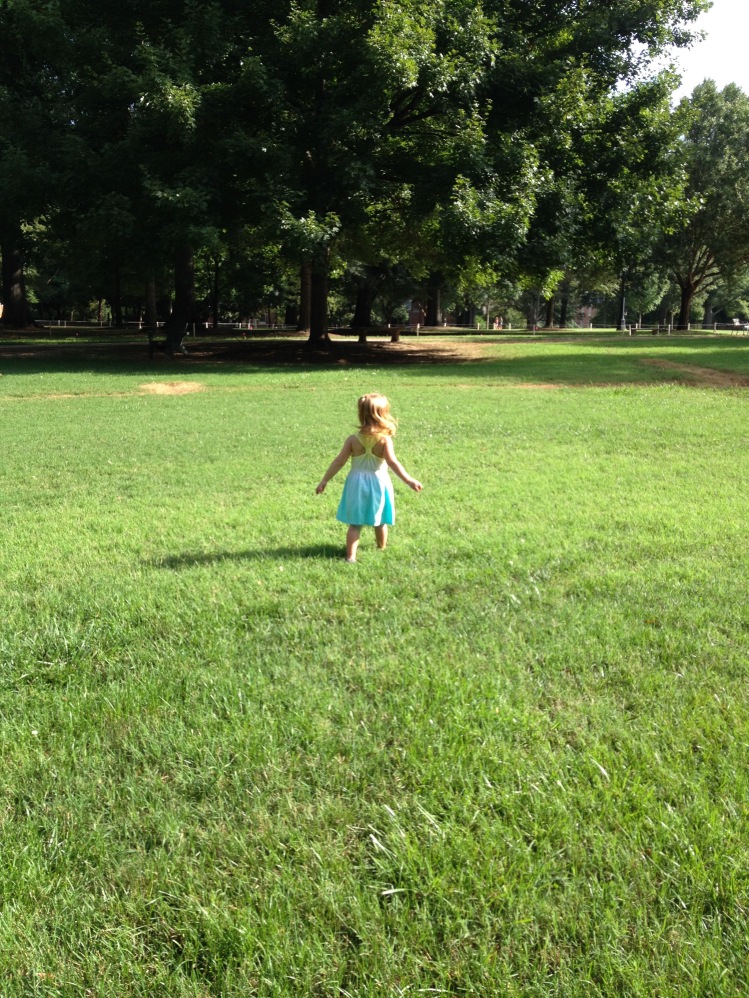 Where do the remnants of your childhood dreams reside? In the back of a closet? In a pile of boxes in a storage locker? In the memory of a childhood hero? Or, is there a kernel of that imagined life germinating in your days @work?

When we get stuck in our careers it makes sense to step back and imagine our work in the eyes of a five year old. Most of us are probably not dressed in the costumes of our earliest aspirations, but taking a look back at a photo of our pre-school self might provide the starting point for redirecting our career GPS.

We spend a lot of time in our lives fulfilling the expectations of others. In school we excel to please teachers and parents, we compete to attend the ‘right’ college to impress our peers, and we contend with other candidates to land the ‘best’ job offer. The process can become an end in itself, and one day we are sitting at our desk wondering how we arrived.

Rewind. What did you want to be when you grew up? Is there an element of that wish that links to the career decision maker you are today?

Maybe the opportunity to be the prima ballerina with the New York City Ballet is no longer an option, but could your dream of the dance connect with an alternative artistic career choice?

Start with small steps. Talk to people who actually are @work in your imagined dream job. What’s the reality? Could you test your interest with an internship or volunteer experience before you abandon your current source of revenue?

When we are young our career fantasies are limitless. We haven’t encountered any opposition to our imagination. That picture of our five year old self is a ‘screen shot’ of us before brick walls. Adults didn’t take our plans too seriously and encouraged our wildest dreams.

When the jacaranda trees are in bloom in Los Angeles you know spring has arrived in this seemingly seasonless place. You notice SIG Alerts on the freeways at odd times of the day until you see groups of folks in gowns and mortarboards being trailed by family bearing great loads of floral bouquets. Commencement time has come and with it, the famous, to deliver advice and receive honorary degrees.

And sometimes, the words spoken at these events are shared across social media, eventually catching the eye of a publisher. In 2000, it was the speech that was never delivered to the Villanova University graduating class by Anna Quindlen that found its’ way onto book shelves two years later as ‘A Short Guide to a Happy Life’. Last month J. K. Rowling‘s 2008 Harvard speech, ‘The Fringe Benefits of Failure, and the Importance of Imagination’ has been published as ‘Very Good Lives’.

There was a time in my career when I worked in a building just north of Coney Island in Brooklyn. My favorite part of Ms. Quindlan’s book is the story at the end:

“I found one of my best teachers on the boardwalk at Coney Island many years ago, it was December and I was doing a story about how the homeless suffer in the winter months. He and I sat on the edge of the wooden supports, dangling our feet over the side, and he told me about his schedule, panhandling the boulevard when summer crowds were gone, sleeping in a church when the temperature went below freezing, hiding from the police amid the Tilt-A-Whirl and the Cyclone and some of the other seasonal rides.

But he told me most of the time he stayed on the boardwalk, facing the water, just the way we were sitting now, even when it got cold and he had to wear his newspapers after he read them. And I asked him why. Why didn’t he go to one of the shelters? Why didn’t he check himself into the hospital for detox?

I first saw a video of J.K. Rowling’s address with a group of students one evening at a black women’s sorority event. These were Ms. Rowling’s first readers, the women who waited in long lines with their parents, some in costume in anticipation of the newest Harry Potter release. Here was J.K.Rowling who appeared on lists of the wealthiest and most successful. On that spring morning in Cambridge she shared her personal story of failure and imagination.

“I have asked myself what I wish I had known at my own graduation, and what important lessons I have learned in the 21 years that have expired between that day and this.

I have come up with two answers. On this wonderful day when we are gathered together to celebrate your academic success, I have decided to talk to you about the benefits of failure. And as you stand on the threshold of what is sometimes called ‘real life’, I want to extol the crucial importance of imagination.

Ultimately, we all have to decide for ourselves what constitutes failure, but the world is quite eager to give you a set of criteria if you let it.

So why do I talk about the benefits of failure? Simply because failure meant a stripping away of the inessential. I stopped pretending to myself that I was anything other than what I was, and began to direct all my energy into finishing the only work that mattered to me. Had I really succeeded at anything else, I might never have found the determination to succeed in the one arena I believed I truly belonged. I was set free, because my greatest fear had been realised, and I was still alive, and I still had a daughter whom I adored, and I had an old typewriter and a big idea. And so rock bottom became the solid foundation on which I rebuilt my life.

Now you might think that I chose my second theme, the importance of imagination, because of the part it played in rebuilding my life, but that is not wholly so. Though I personally will defend the value of bedtime stories to my last gasp, I have learned to value imagination in a much broader sense. Imagination is not only the uniquely human capacity to envision that which is not, and therefore the fount of all invention and innovation. In its arguably most transformative and revelatory capacity, it is the power that enables us to empathise with humans whose experiences we have never shared.”

Most of us don’t remember who spoke at our graduation. Some of us didn’t attend. But all of us can reflect on the words in both speeches and find a kernel to motivate and inspire. For me, it’s paying attention and never closing a door to a conversation that could resonate for a lifetime. It’s the thing that makes us different, empathy. And it’s the stories, always the life stories, where we find wisdom.