It turns out that the path to leadership is paved not just by elite MBA degrees, but also with experience across a range of business functions. Once you arrive in the ‘C Suite’ it’s to your advantage to pay attention to the introverts in the room.

In other stories this week@work, evidence shows an increase in middle class incomes, there’s a new Librarian of Congress, and can you remember Oprah’s first book club pick 20 years ago?

Generalize or specialize? That is the question Neil Irwin answers in ‘A Winding Path to the Top’ for The New York Times.

“How does a person get to be the boss? What does it take for an ambitious young person starting a career to reach upper rungs of the corporate world — the C.E.O.’s office, or other jobs that come with words like “chief” or “vice president” on the office door?

The answer has always included hard work, brains, leadership ability and luck. But in the 21st century, another, less understood attribute seems to be particularly important.

To get a job as a top executive, new evidence shows, it helps greatly to have experience in as many of a business’s functional areas as possible. A person who burrows down for years in, say, the finance department stands less of a chance of reaching a top executive job than a corporate finance specialist who has also spent time in, say, marketing. Or engineering. Or both of those, plus others.”

Many corporations, in the past, had institutionalized ‘rotational assignments’ in a variety of business functions under the aegis of ‘leadership development programs’. When ‘shareowner’ value became the primary measure for CEOs, these internal employee development initiatives were shut down. But the need for cross-functional expertise never went away.

“To be a C.E.O. or other top executive, said Guy Berger, an economist at LinkedIn, “you need to understand how the different parts of a company work and how they interact with each other and understand how other people do their job, even if it’s something you don’t know well enough to do yourself.”

Developing multiple areas of expertise provide a pragmatic workplace foundation for the aspiring entrepreneur, the Fortune 500 CEO, and the variety of public and private leadership opportunities in between.

You learn the language, make life-long career connections, and maintain contact with your customer.

Location seems to influence opportunities as well. Take note, all you folks who hesitate to relocate.

“Beyond the results on job functions, the data from LinkedIn shows some trends for which the explanations aren’t completely obvious. For example, former consultants who lived in New York or Los Angeles had higher odds of ending up with a top job than people in other large cities like Washington or Houston. A former management consultant with 15 years of work experience in six different functions and an M.B.A. from a top school had a 66 percent chance of becoming a top executive if he lived in New York compared with a 38 percent chance in Washington.”

Bottom line, moving out of you career comfort zone, whether that means function or city, holds long-term implications for career success.

The second story this week@work comes from the print edition of The Economist, ‘Shhhh! Companies would benefit from helping introverts to thrive’.

Most companies worry about discriminating against their employees on the basis of race, gender or sexual preference. But they give little thought to their shabby treatment of introverts.

The recent fashion for hyper-connectedness also reinforces an ancient prejudice against introverts when it comes to promotion. Many companies unconsciously identify leadership skills with extroversion—that is, a willingness to project the ego, press the flesh and prattle on in public.

What can companies do to make life better for introverts? At the very least, managers should provide private office space and quiet areas where they can recharge. Firms need to recognise that introverts bring distinctive skills to their jobs. They may talk less in meetings, but they tend to put more thought into what they say. Leaders should look at their organisations through the introverts’ eyes. Does the company hold large meetings where the loudest voices prevail? That means that it is marginalising introverts. Does it select recruits mainly on the basis of how they acquit themselves in interviews? That could be blinding it to people who dislike performing in public.”

“Middle-class Americans and the poor enjoyed their best year of economic improvement in decades in 2015, the Census Bureau reported Tuesday, a spike that broke a years-long streak of disappointment for American workers but did not fully repair the damage inflicted by the Great Recession.

In addition, the poverty rate fell by 1.2 percentage points, the steepest decline since 1968. There were 43.1 million Americans in poverty on the year, 3.5 million fewer than in 2014. The share of Americans who lack health insurance continued a years-long decline, falling 1.3 percentage points, to 9.1 percent.

“The highest income growth was in the bottom fifth” of workers, “which is very welcome news,” said Lawrence Mishel, president of the liberal Economic Policy Institute think tank. Furman, of the White House, credited wage-boosting policy initiatives for some of that increase: “The fact that millions of workers have gotten a raise, as states have raised minimum wages, has definitely had an effect there,” he said.

All told, the gains brought median incomes nearly back to their levels before the recession, after adjusting for inflation, though they remain below 1999 levels. Bureau officials said the 5.2 percent growth rate was not statistically distinguishable from five other previous increases in the data, most recently the 3.7 percent jump from 1997 to 1998.”

On Wednesday, Carla Hayden was sworn in as the 14th Librarian of Congress. “Hayden, the first woman and the first African American to lead the national library, was nominated to the position by President Barack Obama on February 24, 2016, and her nomination was confirmed by the U.S. Senate on July 13.”

Baynard Woods covered the appointment for The Guardian, ‘Carla Hayden: new librarian of Congress makes history, with an eye on the future’.“Even though librarianship is one of the four what they call feminized professions – social work, education nursing, and librarianship – where 85% of the workforce is female, there haven’t been an equal amount of women in the leadership positions,” Hayden said in an interview.

Hayden is also only the third Librarian of Congress to actually have training as a librarian.

“There have been lawyers and politicians, historians, scholars, librarians, and I think at this time it’s not a detriment to have a librarian be librarian of Congress,” she said.

The librarian of Congress oversees the world’s largest library system. As the name indicates, one of the main roles of the library is to assist Congress in the research it needs in order to pass bills. It also oversees the US copyright system, names the poet laureate, and preserves historical documents and books.

Hayden first came to national prominence in 2003 when she spoke out against certain elements of the Patriot Act as the head of the American Library Association. Attorney general John Ashcroft attacked Hayden for sowing “hysteria” about the provision of the act that would allow the government to search library and bookstore records.

“We are deeply concerned that the attorney general should be so openly contemptuous of those who seek to defend our Constitution,” she said. “Rather than ask the nation’s librarians and Americans nationwide to ‘just trust him,’ Ashcroft could allay concerns by releasing aggregate information about the number of libraries visited using the expanded powers created by the USA Patriot Act.”

At the time, there was political risk in such statements, but Hayden said she never considered that.”

In history@work this week, September 17 marked the 20th anniversary of Oprah Winfrey’s Book Club. Do you remember the first pick? Jacquelyn Mitchard‘s ‘Deep End of the Ocean’. 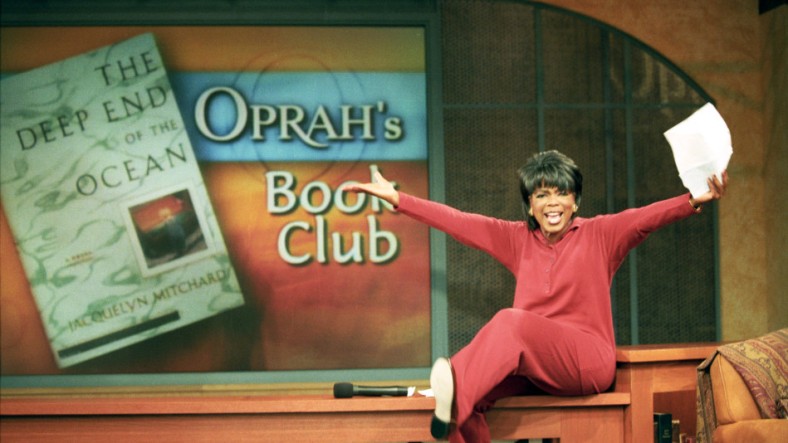 When Oprah’s Book Club first launched, some in the publishing world were skeptical about its chances for success. As The New York Times noted: “Winfrey’s project—recommending books, even challenging literary novels, for viewers to read in advance of discussions on her talk show—initially provoked considerable skepticism in the literary world, where many associated daytime television with lowbrow entertainments like soap operas and game shows.” However, the club proved to be a hit with Winfrey’s legions of fans, and many of her picks sold over 1 million copies. (She earned no money from book sales.) Winfrey’s ability to turn not just books but almost any product or person she recommended into a phenomenon came to be known as the “Oprah Effect.”

Celebrate this week@work with a selection from Oprah’s long list of book recommendations.