The week@work was dominated by stories of the small group of workers in entertainment, sports and politics. It was also the week that everyone had the opportunity to imagine entry into the world of celebrity via the purchase of a single $2 lottery ticket.

On Sunday evening the Hollywood Foreign Press Association handed out their annual Golden Globes, with the surprise winner being Mexican actor, Gael Garcia Bernal for his role as conductor of the fictional ‘New York Symphony’ in Amazon’s Golden Globe winning ‘Mozart in the Jungle’. “I want to dedicate this to music, to all the people that find the music and common ground for communication, for justice for happiness.”

As Huell Howser might say, “This is amazing!”, that a series about classical musicians led by a talented Mexican actor, wins an award in a year of political polarization and classical music’s declining prominence in our culture.

On Thursday, the actor who played Severus Snape in the Harry Potter series, Alan Rickman died. “With the last film it was very cathartic because you were finally able to see who he was,” Mr. Rickman said “It was strange, in a way, to play stuff that was so emotional. A lot of the time you’re working in two dimensions, not three.” 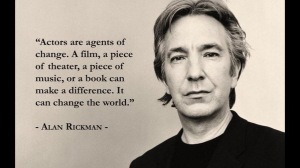 Agents of change in theater, music, and the workplace challenge our thinking. On Monday we learned of the death of another transformational icon, David Bowie.

“In his dazzling artistry, daring style, unabashed intelligence, intensity of emotion, cultivation of magic, mystery and imagination, Bowie was a figure who bridged high and low culture, reverberating on so many different levels.”

“I’m not actually a very keen performer. I like putting shows together. I like putting events together. In fact, everything I do is about the conceptualizing and realization of a piece of work, whether it’s the recording or the performance side. And kind of when I put the thing together, I don’t mind doing it for a few weeks, but then, quite frankly, I get incredibly, incredibly bored because I don’t see myself so much as a – I mean, I don’t live for the stage. I don’t live for an audience.”

David Bowie event planner? When we think of careers, we make assumptions about success, only to realize that each of us holds a unique definition which sculpts our approach to a calling.

“People often forgot, but up until his death, on Sunday at age 69, Mr. Bowie was a New Yorker…

And though Mr. Bowie was enormously wealthy, he wasn’t one of those rich guys who kept an apartment in the city, along with a portfolio of global real estate holdings, and flew in. Aside from a mountain retreat in Ulster County, N.Y., his Manhattan apartment was his only home.

You may not have considered all this because Mr. Bowie was an apparition in the city, rarely glimpsed. You heard it mentioned that he lived here. Somewhere downtown, someone thought. But seeing him out? Good luck.”

How many folks have decided to take a job in New York or LA only to later realize a major disconnect? This is not a value judgement, just a realization that we all need to find a place where we can be successful. Unfortunately, the job perks sometimes outweigh the geographical/cultural component in the decision making mix and it’s only when we are fully committed to our workplace that we begin to realize our success is being eroded by deficiencies in our neighborhood.

On to the world of sports. On Monday evening, two college football teams competed in the College Football National Championship game in Arizona. The University of Alabama’s team won by a score of 45-40 over Clemson. A few days later at the NCAA’s annual meeting, “NCAA president Mark Emmert praised student-athlete activism during his annual speech Thursday at the NCAA convention.”

During his 20-minute address at the NCAA’s opening business session, Emmert urged schools to continue to emphasize academics, fairness and the health and well-being of student-athletes.”

And yet, actions speak louder than words. Inside Higher Education reported, “While the time demands on college athletes ­became the central focus of the National Collegiate Athletic Association’s annual meeting here this week, several proposals to deal with the issue were seemingly tabled the day before the NCAA’s five wealthiest conferences were scheduled to vote on them.”

Here’s the thing. With the exception of college coaches, everyone is in agreement that the ‘student’ in the ‘student-athlete’ equation takes priority. ‘Official’ time demands don’t begin to reflect the ‘unofficial’ time requirements of competing in Division I sports. And with only a select few moving on to compete in their sport as professionals, these students need the flexibility to explore career opportunities and participate in internships.

“Roderick McDavis, president of Ohio University, said it would be a mistake for colleges to wait for NCAA policy changes to prompt that shift. “Policies don’t change behavior,” he said. “People change behavior. We can hope that the NCAA catches up with us all one day, but what I know I can control is I can go home tomorrow and make a difference on my campus.”

And then there were the omnipresent billboards advertising the Powerball Jackpot at $999 million. Except the amount had grown to over $1.5 billion, which gave us all an opportunity to contemplate what we would do with that amount of money.

On a CNN broadcast the night before the drawing, international anchor Richard Quest asked anchor Anderson Cooper what he would do with the winnings if he had the lucky set of numbers. (You may know that Mr. Cooper is a Vanderbilt by ancestry.) His response, “I would buy a watch.” And he would be back at work the next day.

Here are a few additional articles that you may have missed from the past week.

‘Why I Always Wanted to Be a Secretary’ by Bryn Greenwood – Does your work define you? What if your dream job is central to an organization, but society’s definition is demeaning?

‘At Work And Feeling All Alone’ by Phyllis Korkki – In the world of telecommuting, new research indicates those left behind in the office have ended up feeling lonely and disconnected.

‘60% of Women in Silicon Valley Have Been Sexually Harassed’ by Lydia Dishman – Results of a survey of 200 women demonstrates a serious level of dysfunction in the tech giants’ workplace.

‘Yahoo’s Brain Drain Shows a Loss of Faith Inside the Company’ by Vindu Goel – “More than a third of the company’s work force has left in the last year, say people familiar with the data. Worried about the brain drain, Ms. Mayer has been approving hefty retention packages — in some cases, millions of dollars — to persuade people to reject job offers from other companies. But those bonuses have had the side effect of creating resentment among other Yahoo employees who have stayed loyal and not sought jobs elsewhere.”