This week@work world leaders and policy gurus headed to Davos, Switzerland for the annual World Economic Forum, actors and directors arrived in Park City, Utah for the Sundance Film Festival and the rest of us enjoyed a snow day without the airfare. Transparency was suggested as a way to close the pay gap and provide a fair balloting process for the Oscars. And finally, for you procrastinators, research finds your approach to problem solving is more creative.

Of all the tweets emanating from the World Economic Forum, the most stunning came from Sharan Burrow, participating on ‘The New Climate and Development Imperative’ panel. Ms. Burrow is General Secretary of the International Trade Union Confederation. In discussing the drivers of action for development and climate targets she stated, “For workers, there are no jobs on a dead planet.” If that doesn’t bring home the reality of climate change to each global citizen, I’m not sure what will.

One of the ten major global challenges identified by the WEF poses the question, What does the world of work look like today and what will it look like in the future? 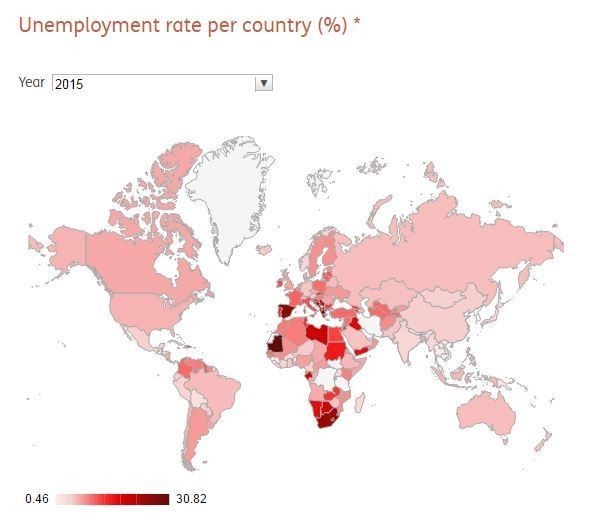 “The scale of the employment challenge is vast. The International Labour Organization estimates that more than 61 million jobs have been lost since the start of the global economic crisis in 2008, leaving more than 200 million people unemployed globally.

Nearly 500 million new jobs will need to be created by 2020 to provide opportunities to those currently unemployed and to the young people who are projected to join the workforce over the next few years.

At the same time, many industries are facing difficulty hiring qualified staff. One 2015 survey found that, globally, 38% of all employers are reporting difficulty filling jobs, a two-percentage point rise from 2014.

Put simply, we need jobs for the hundreds of millions of unemployed people around the world, and we need the skilled employees that businesses are struggling to find.”

Two additional perspectives of the Davos conference were provided by Alexandra Stevenson for The New York Times, ‘Glass Ceilings at Davos, Now on the Agenda’, and Anne Marie Slaughter‘s ‘A Tale of Two Feminisms at Davos’.

Several time zones west, the Sundance Film Festival began its ten day run in Park City, Utah. Since 1978, it has been the place for independent film makers to show their dramatic and documentary films. A number of these films eventually became Oscar nominees, which brings us to a conversation on transparency.

For the past two weeks, since the announcement of the Academy Awards, the major recognition for those who work in film, the conversation has centered on the lack of progress in diversifying the industry and its major export, films. How many of us even knew how the voting was done as we mindlessly watch red carpet arrivals and comment on fashion, performances and our bets to win?

Glenn Whipp of the LA Times shared ‘Here’s How Oscar Voting Is Done’.

“Who nominates the actors for the Oscars? And how does the voting process work? Here’s a step-by-step primer:

The Motion Picture Academy of Arts and Sciences has 6,261 voting members. The entire body votes for best picture.

Nominations for most of the remaining categories are determined by the balloting of the academy’s various branches. A committee selects the foreign-language film nominees.”

The full article, though short, will definitely make your hair hurt, and prompt the question, why the delay in reform?

Film mogul, actor and producer, Tyler Perry offered his solution –“If the Academy – I think all this would go away if they revealed the votes,” Perry said. “If you look at a movie like ‘Straight Outta Compton’ right and just say it got 1,000 votes and ‘The Revenant’ got 1, 001 votes, is that racism or is it just this is the way the votes went?”

We might all benefit from transparency and a clear set of rules beyond the intersection of Hollywood and Vine. Claire Cain Miller proposes we “publish everyone’s pay” as one answer to ‘What We Can Do to Close the Pay Gap’.

“When the comedian Ricky Gervais joked that he was paid the same to host the Golden Globes as the actresses Tina Fey and Amy Poehler — combined — his barbed humor most likely resonated in many workplaces.

Jake Rosenfeld, a sociologist at Washington University, has found that salary transparency raises wages, in part by lending legitimacy to employees’ arguments in wage bargaining. “Even being cognizant of gender pay disparity being an issue can change norms,” he said.

That has been true in the public sector, where disclosing pay information is often required. Alexandre Mas, an economist at Princeton, studied the effects of a 2010 California law that required cities to publish municipal salaries. It prompted pay cuts, but only among men.

Women might have been spurred to negotiate after seeing that their salaries were lower, he theorized, or cities might have made salaries more equitable to avoid lawsuits.”

Bottom line, there are a lot of global and domestic problems to be solved and they require serious thought, teamwork and creativity.

Wharton professor Adam Grant shared the benefits of re-thinking his pre-crastination habit in ‘Why I Taught Myself to Procrastinate’, and found “..while procrastination is a vice for productivity, I’ve learned — against my natural inclinations — that it’s a virtue for creativity. It turns out postponement can encourage divergent thinking.

A few years ago, though, one of my most creative students, Jihae Shin, questioned my expeditious habits. She told me her most original ideas came to her after she procrastinated. I challenged her to prove it. She got access to a couple of companies, surveyed people on how often they procrastinated, and asked their supervisors to rate their creativity. Procrastinators earned significantly higher creativity scores than pre-crastinators like me.”