This week@work captured snapshots of genuine human moments: a vp expressing emotion in a late night talk show conversation, a tennis champion’s loss to an unseeded and 43rd world ranked competitor and commemorations of a day 14 years ago that we will #NeverForget.

In the U.S. we are in the midst of a presidential selection process that accentuates the loud and outrageous vs. the rational and purposeful. So it was refreshing to read an article by David Zweig, ‘The Myth of the Larger Than Life Leader’.

“The reality, as many professionals who tend to fall more on the quiet end of the spectrum can attest to, is that many of the best workers—be they at the top of the pyramid or somewhere in the middle—go about their business, achieving great results without fanfare. And while it may feel as though the whole world is beguiled by those who make the most noise in conference rooms and boardrooms, it’s encouraging and, critically, worth noting that that’s not actually the case.”

Which brings me to the extraordinary interview by Steven Colbert with Vice President Biden on Thursday evening. In a conversation that ranged from the personal to the professional, the vice president shared his perspective on the interview process for president.

He began by posing a question to the audience, that’s relevant to each of us when we are looking for work. “Would you want a job, that in fact, every day you had to get up and you had to modulate what you said and believed?”

He continued with more career advice. “If you can’t state why you want the job, then there’s a lot more lucrative opportunities in other places.”

He then talked in specifics about the requirements to interview for the top job. “I don’t think any man or woman should run for president unless, number one, they know exactly why they would want to be president, and two, they can look at the folks out there and say, “I promise you, you have my whole heart, my whole soul, my energy and my passion to do this.”

On Friday, one of tennis’ greatest players, Serena Williams, lost her semi-final match at the US Open and ended her quest for the calendar Grand Slam. It’s a reminder to all of us that there are no guarantees. In any competitive situation, there is always the chance we will fail. This week it was an unseeded, 33 year old player from Taranto, Italy, Roberta Vinci who prevailed in three sets.

The stage was set for a women’s final between two former Italian tennis academy roommates, Flavia Pennetta and Roberta Vinci. Cue the author, Elena Ferrante to script this story worthy of her heroines Elena and Lila of the Neopolitan novels.

In front of a sold out crowd, including Italian Prime Minister, Matteo Renzi, Flavia won in straight sets on Saturday, announcing her retirement as she accepted the US Open Championship trophy. Just as we met her, she shared a career lesson and  stepped away to reinvent her life. 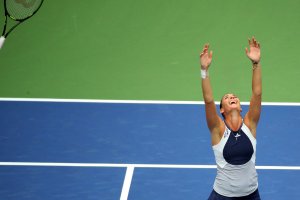 So we #NeverForget, a poem written for the 43 members of Hotel Employees and Restaurant Employees Local l00, working at the Windows on the World restaurant, who lost their lives in the attack on the World Trade Center

Alabanza. Praise the cook with a shaven head
and a tattoo on his shoulder that said Oye,
a blue-eyed Puerto Rican with people from Fajardo,
the harbor of pirates centuries ago.
Praise the lighthouse in Fajardo, candle
glimmering white to worship the dark saint of the sea.
Alabanza. Praise the cook’s yellow Pirates cap
worn in the name of Roberto Clemente, his plane
that flamed into the ocean loaded with cans for Nicaragua,
for all the mouths chewing the ash of earthquakes.
Alabanza. Praise the kitchen radio, dial clicked
even before the dial on the oven, so that music and Spanish
rose before bread. Praise the bread. Alabanza.

Praise Manhattan from a hundred and seven flights up,
like Atlantis glimpsed through the windows of an ancient aquarium.
Praise the great windows where immigrants from the kitchen
could squint and almost see their world, hear the chant of nations:
Ecuador, México, Republica Dominicana,
Haiti, Yemen, Ghana, Bangladesh.
Alabanza. Praise the kitchen in the morning,
where the gas burned blue on every stove
and exhaust fans fired their diminutive propellers,
hands cracked eggs with quick thumbs
or sliced open cartons to build an altar of cans.
Alabanza. Praise the busboy’s music, the chime-chime
of his dishes and silverware in the tub.

Alabanza. Praise the dish-dog, the dishwasher
who worked that morning because another dishwasher
could not stop coughing, or because he needed overtime
to pile the sacks of rice and beans for a family
floating away on some Caribbean island plagued by frogs.
Alabanza. Praise the waitress who heard the radio in the kitchen
and sang to herself about a man gone. Alabanza.

After the thunder wilder than thunder,
after the shudder deep in the glass of the great windows,
after the radio stopped singing like a tree full of terrified frogs,
after night burst the dam of day and flooded the kitchen,
for a time the stoves glowed in darkness like the lighthouse in Fajardo,
like a cook’s soul. Soul I say, even if the dead cannot tell us
about the bristles of God’s beard because God has no face,
soul I say, to name the smoke-beings flung in constellations
across the night sky of this city and cities to come.
Alabanza I say, even if God has no face.

Alabanza. When the war began, from Manhattan and Kabul
two constellations of smoke rose and drifted to each other,
mingling in icy air, and one said with an Afghan tongue:
Teach me to dance. We have no music here.
And the other said with a Spanish tongue:
I will teach you. Music is all we have. 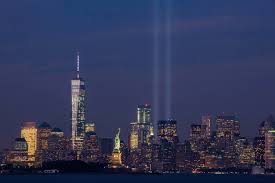