A collection of amateur photos taken by ordinary British citizens, on the 100th anniversary of the Battle of the Somme, served to bridge a century, and punctuate the generational divide that led ‘the lost generation’ to war, and ‘the millennials’ to #Brexit.

The topic #wearehere started trending early Friday morning as British citizens headed to work and encountered young men clad in the uniforms of World War I. For a few hours, in London, Aberystwyth, Birmingham, Sheffield, Salisbury, and Plymouth, the ghost soldiers of the Somme walked among their contemporaries.

Many of those first encounters were recorded on Twitter and Instagram, as commuters received cards from these ‘soldiers’. 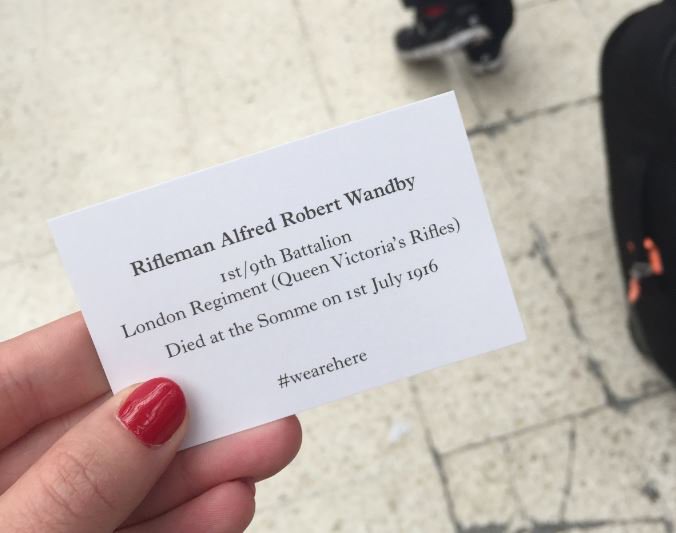 “Thousands of volunteers took part in a UK-wide event on Friday 1 July 2016, as a modern memorial to mark the centenary of the Battle of the Somme. 19,240 men were killed on the first day of the battle in 1916 – the bloodiest day in British military history.

‘we’re here because we’re here’ saw around 1400 voluntary participants dressed in First World War uniform appear unexpectedly in locations across the UK. Each participant represented an individual soldier who was killed on that day one hundred years before.”

Charlotte Higgins reported on the day for The Guardian newspaper. “The event, which unfolded without advance publicity, can now be revealed as a work by Jeremy Deller, the Turner prize-winning artist…Deller worked with Rufus Norris, the artistic director of the National Theatre in London, and theatres throughout the UK to train the volunteer army.

Deller was approached to devise an artwork to mark the centenary of the first day of the Battle of the Somme by 14-18 NOW, the body responsible for art commissions commemorating the war. “I quickly realised that what I didn’t want was a static memorial that the public went to to be sad,” he said. “In the 21st century I felt we had do something different. So I thought about the memorial being human, and travelling round the country. It would take itself to the public rather than the public taking itself to the memorial.”

“And also the public wouldn’t know in advance that there was this thing happening – they would encounter it in the shopping centres and carparks and outside schools and in everyday British life. And I wanted to avoid heritage places – churches, war memorials. I wanted to take it to the public.” His key idea, he said, was to “avoid sentimentality”.

Look at the photo of the finale at Waterloo Station. A group of soldiers at the center are surrounded by their contemporaries, telegraphing the moment to social media. Two generations, a century apart facing unknown fates @war, and after #Brexit.

The politics of the early 20th century led to over a million British, French and German casualties in the Battle of the Somme between July 1 and November 18, 1916.

So what have we learned in 100 years?

Someone thought it would be a great idea to preserve the peace and form a European Union. For all its frailties, its crowning achievement was replacing nationalism with an overlay of a ‘European’ identity; a multilingual, multicultural generation that travels freely across the continent to study, work, live and love.

Francesca Barber, a self-described ‘transnational’, gave voice to this dilemma of altered identity in the wake of #Brexit.

“I was born in Washington in the late 1980s, grew up in Brussels, moved to London and then returned to the United States, where I lived in New York City; Providence, R.I.; and San Francisco.

My parents are English. My first language was French. I went to a Belgian school and the European School in Brussels, where my classmates almost always spoke at least three languages.

My childhood was defined by endless car journeys across Europe. And as an adult, I have enjoyed the benefits of cheap deals on low-cost European airlines. Most of my friends have gone to school and worked in at least two European countries. I am part of the Erasmus generation. My friends and my roots are everywhere — and only now do I realize how much I took that for granted.

The “Brexit” vote on June 23 was the most serious geopolitical event for Europe since the fall of the Berlin Wall. But lost in all the geopolitics is another important message: It was a resounding vote against globalization from a country that has for so long been a proud champion of globalization.

But this vote was also a rejection by my fellow countrymen, from my parents’ generation to mine, of everything I cherished about Europe, Britain and my own childhood: the sense that our differences were less important than our shared experiences.”

Maybe it’s time for a ‘we are here’ for the European millennials – a ‘counter Brexit’, public art project.  What if, on a Friday morning, all over Britain, young workers approached commuters with CV profile cards, each participant representing a dream lost to Brexit? Mr. Deller, Mr. Norris we could use your help here.