“The Nobel Prize in Literature for 2016 is awarded to Bob Dylan “for having created new poetic expressions within the great American song tradition”.

In the hours that followed, the surprise decision was debated by the literati. A frequently mentioned candidate for the prize in literature, author Salman Rushdie, placed the choice in context via Twitter.

“From Orpheus to Faiz, song & poetry have been closely linked. Dylan is the brilliant inheritor of the bardic tradition. Great choice.”

In honor of that choice, the Friday Poem this week is Dylan’s ‘The Times They Are A-Changin’.

The Times They Are A-Changin’

Come senators, congressmen
Please heed the call
Don’t stand in the doorway
Don’t block up the hall
For he that gets hurt
Will be he who has stalled
There’s a battle outside and it is ragin’
It’ll soon shake your windows and rattle your walls
For the times they are a-changin’ 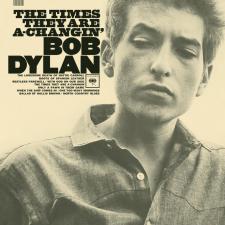