The Saturday Read returns! The first selection of 2018 is the biography, ‘Leonardo da Vinci‘ by Walter Isaacson. This is a life story disguised as an art book translating the fifteenth century wisdom of a genius into the language of our present day innovation canon.

What is it about Leonardo that resonates with us over five hundred years later?

“The fifteenth century of Leonardo and Columbus and Gutenberg was a time of invention, exploration, and the spread of knowledge by new technologies. In short, it was a time like our own. That is why we have so much to learn from Leonardo. His ability to combine art, science, technology, the humanities and imagination remains an enduring recipe for creativity.”

The narrative of the polymath has captivated Isaacson in all his previous work. In ‘da Vinci’ he has found the origin story and he’s the perfect narrator to introduce a twenty-first century audience to the man “who never outgrew his wonder years.”

If you are a person who is intimidated by a 500+ page doorstop of a book, don’t be. Leonardo’s fifteenth century artwork, notebook transcripts, sketches and drawings engage with the text to guide the reader through the history, culture and political upheaval of Milan, Florence, Rome and France.

to catch a brief glimpse of the Mona Lisa… 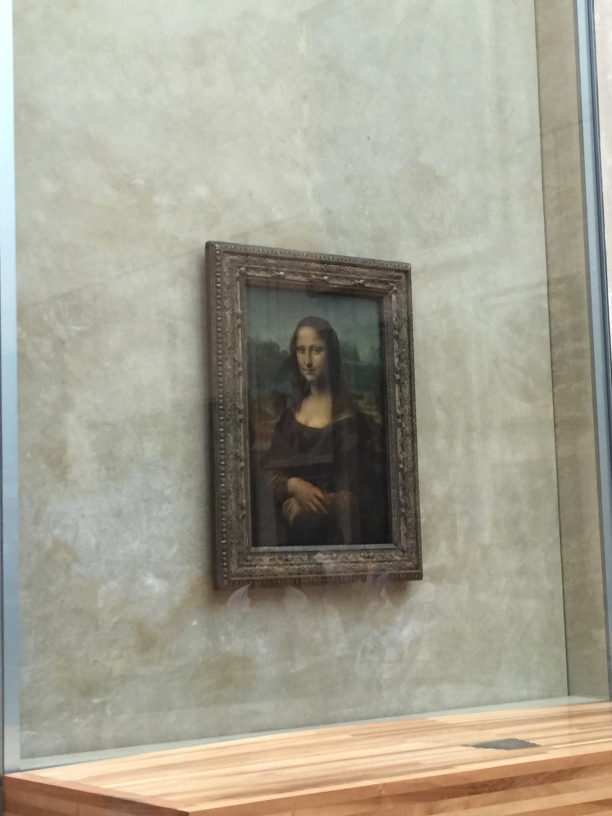 this is the backstory. Isaacson devotes a chapter near the end of the book to the portrait, describing Leonardo’s work process. “He began working on it in 1503, when he returned to Florence after serving Cesare Borgia. But he had not finished it when he moved back to Milan in 1506. In fact, he carried it with him, and continued to work on it, throughout his second period in Milan and then during his three years in Rome. He would even take it to France on the final leg of his life journey, adding tiny strokes and light layers through 1517. It would be in his studio there when he died.”

I read the biography over four weeks, one chapter at a time, alternating with other reading. It gave me time to reflect on the multiple aspects of his genius and connect Leonardo’s behavior with what I have read over the years in hundreds of Harvard Business Review articles on the topic of innovation.

My non-fiction book club had selected ‘da Vinci’ as the January choice. The discussion centered on the aspects of math, science and art; each member commenting from their frame of reference. Finally, I added my view through the lens of @workthoughts. This is a book that advocates for the generalist vs. the specialist. In many aspects it’s a career guide. Imagine an extended conversation with a mentor tracing their work/life trajectory.

Isaacson concludes with ‘Learning from Leonardo’, beginning with some familiar basics of twenty-first century theories of creativity. A sampling: “Be curious, relentlessly curious”. “Seek knowledge for its own sake.” “Observe.”Get distracted.” “Avoid silos.” “Take notes, on paper.” “Be open to mystery.” There’s more. Shadowing each of these ‘lessons’ is the story of Leonardo and his exploration of man and nature; his evolution, still tinkering with the Mona Lisa at the time of his death.

‘Leonardo da Vinci’ is your ‘professional development book’ of the year. It will break you out of your ‘career specialization rut’, opening your eyes to the ‘dots’ you didn’t even know you could connect.

If you make one bookstore purchase, continue your life-long learning with this one. “Let your reach exceed your grasp.”

“Above all, Leonardo’s relentless curiosity and experimentation should remind us of the importance of instilling, in both ourselves and our children, not just received knowledge but a willingness to question it – to be imaginative and, like talented misfits and rebels in any era, to think different.”